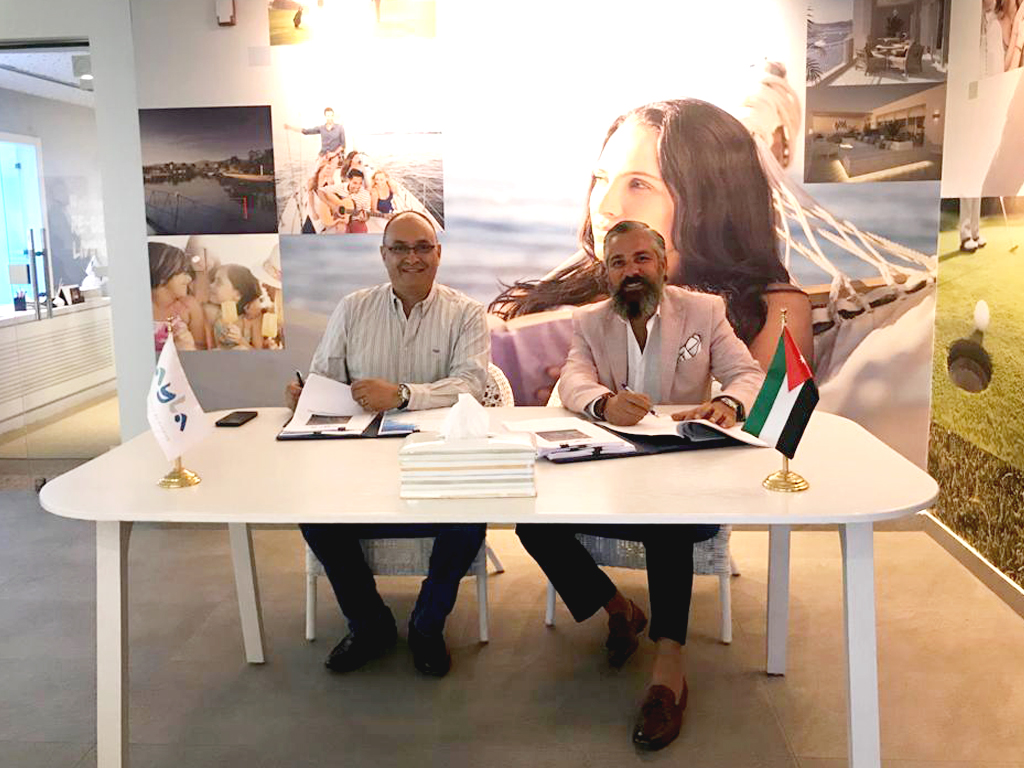 In yet another major milestone in its development, Ayla recently signed an agreement with Akkawi Group to expand the food and beverage offerings within its Marina Village retail space, in accordance with Ayla’s long-term plan for the project.

The agreement was signed by Ayla’s Managing Director, Sahl Dudin, and Akkawi Group’s CEO, Ziad Akkawi. Under it, Akkawi Group will launch three international food and beverage outlets that will significantly add variety to the project’s Marina Village retail space, offering residents and visitors a wide array of world-class delicacies and venues that fit into the Ayla model and brand identity, combining modern aesthetics and service with timeless staples to create a truly seamless experience.

This agreement fulfils the commitment made by Ayla to have a fully live retail space by early 2019, which Ayla considers one of the core components of the project and a key aspect of the overall lifestyle on offer. The company is currently in the process of formulating agreements with other major vendors and investors, with a number of those slated for announcement in the coming months as part of this concerted effort to deliver a high quality and diverse retail hub within the project.

“We are proud of the agreement signed with Akkawi Group, who has continuously elevated the standards of retail service in Jordan by providing customers with world-class experiences driven by quality, diversity and attention to detail,” commented Ayla’s Managing Director, Sahl Dudin. “This agreement also falls in line with our long-term vision for Ayla as a mixed-use residential community that houses all the amenities, services and conveniences of a luxury lifestyle within its ever-growing components.”

Dudin further noted that Akkawi Group’s proposal has demonstrated the depth of its understanding of Ayla’s master plan and the overarching vision that has driven the project’s growth over the years. He underscored his confidence that the food and beverage outlets launched by the group will substantially elevate the choices and level of services offered at the retail space, setting a shining example for other investors to follow.

Akkawi Group’s CEO, Ziad Akkawi, underscored the importance of this agreement, noting that the group is committed to bringing Ayla’s residents and visitors’ best-in-class outlets and services that meet the lofty standards established by the project.

“Given Ayla’s unwavering attention to detail and its commitment to redefining the standards of luxury lifestyles, their vision is very much in harmony with that of Akkawi Group’s, and we are proud to join hands with what is undoubtedly the most investor-friendly and forward-thinking mixed-use development project in Jordan”

It is worth noting that Marina Village is one of the key components of the Ayla project, offering a seaside retail space with a consistently growing lineup of retail, food and beverage outlets tailored to meet the diverse tastes and needs of Ayla’s residents and visitors. The seaside space has become widely recognized as a lucrative opportunity for potential investors looking to expand within the retail landscape, not only due to its location within the rapidly-growing Ayla project, but also due to the fact that it offers an unparalleled combination of panoramic views, meticulously designed urban spaces, and access to high-end facilities.

The Top 5 Family Activities in Jordan

The Top 5 Cultural Activities in Jordan