Ayla Oasis Development Company and The Royal Society for the Conservation of Nature (RSCN) have recently renewed their Cooperation & Partnership Agreement, which has been going on for six years. 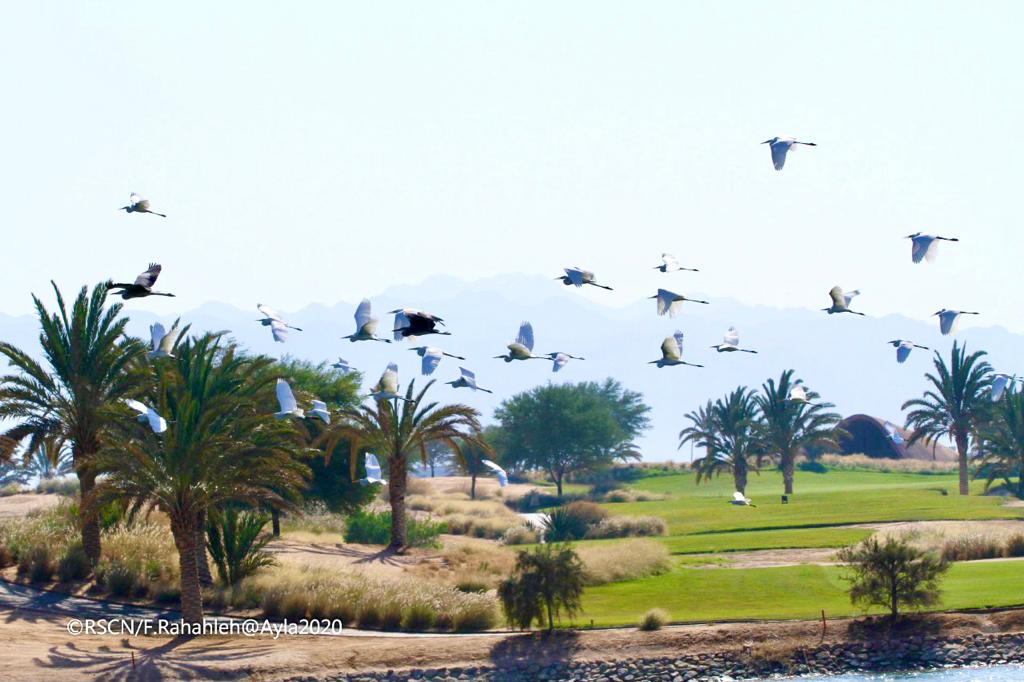 Ayla is currently working in cooperation with Aqaba Bird Observatory on completing several routes for the bird observation fans starting from Ayla and on providing facilities to make the international observation programs successful.

Ayla Oasis Development Company and The Royal Society for the Conservation of Nature (RSCN) have recently renewed their Cooperation & Partnership Agreement, which has been going on for six years. The Agreement aims at studying the effect of bodies of water and green spaces on the polarization of migratory birds; furtherance and sustainability of local and permanently resident birds; and provision of technical consultations on the birds’ increase in accordance with the approved environmental practices.

Ayla is an important point of attraction for migratory birds and the sedentary birds of the Region. The renewal of the Cooperation Agreement with RSCN through Aqaba Bird Observatory helps furthering the sustainability efforts made by Ayla and highlighting the types of resident and visiting / migratory birds that finds Ayla and its utilities to be a safe environment for visiting or sedentariness.

Eng. Sahel Dudin, Ayla Oasis Development Company’s Managing Director, is happy with the continuity of the cooperation with the RSCN and Aqaba Bird Observatory, which represents Ayla’s corporate vision by adopting the best environmental practices that further the sustainable housing and tourism style. The Agreement helps ensuring the best ways to protect the environment are followed, and form the cornerstone of taking care of migratory birds.

“Ayla is one of the environment friendly urban projects and we will maintain the highest level of care of natural resources,” said Dudin. “This cooperation with Aqaba Bird Observatory resulted in positive achievements with respect to environment in general including birds. Since 2014, dozens of species of rare birds of Jordan were spotted in Ayla. The number of resident and migratory birds is increasing and their sedentariness in Ayla noticeably gets longer according to the periodic surveys conducted by RSCN through Aqaba Bird Observatory. This encourages us to show the species and numbers of birds and to help marketing the global bird watching and observation as a new kind of environmental tourism incoming and growing in this field worldwide.”

Eng. Yahia Khaled, RSCN’s General Manager, talked about the aspects of future cooperation with Ayla and taking that cooperation to the next level building on the previous successes, especially with regard to education, awareness raising and increasing the number of habitats.

Eng. Firas Rahahleh, Aqaba Bird Observatory’s Manager, presented the results of the recently performed bird observation in Aqaba. The bird survey conducted by Aqaba Bird Observatory showed excellent results of habitats in Ayla and the roles played by it in the activities of awareness raising such as organizing a family event to celebrate the World Migratory Bird Day in which approximately 4.000 people of the local community took part. Furthermore, Aqaba Bird Observatory participated in the biggest bird gallery in Europe and organized a trip for a number of specialized journalists to see birds in Aqaba.

Sponsored by Ayla Oasis Development Company, Al Rahahleh announced the production of a virtual movie called Bird Eye 360, which is a fruit of constructive cooperation between Aqaba Bird Observatory and Ayla. The produced movie discusses the routes and ways of birds’ migration, as they pass by Ayla and Aqaba Bird Observatory for a rest.

Ayla is currently working in cooperation with Aqaba Bird Observatory on completing several routes for the bird observation fans starting from Ayla and on providing facilities to make the international observation programs successful.

“Dozens of species of migratory birds have been being recorded since 2014,” said Al Rahahleh. “In total, 103 unique species of unobserved birds have been recorded by Aqaba Bird Observatory, three of which have been hardly recorded in Jordan, and another one was recorded for the first time even in Aqaba. The latest recording took place in the beginning of 2020, and it was an Oystercatcher, which had been documented as last recorded at Aqaba beaches in 1992, while last time recorded nationwide had been in 2004.

Aqaba Bird Observation is among the hot spots of bird migration around the world and in big numbers of birds. It is also an example of performance integration amongst the national corporations for the sake of building a unique environmental tour product.